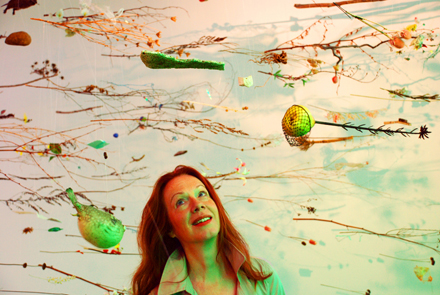 With her performance series G.sänge (singings) the Bremen voice artist and composer Gabriele Hasler will be a guest of the GAK Gesellschaft für Aktuelle Kunst three times in 2011. G.sänge for solo voice and sound objects draw from the fund of world music, avant-garde and new music. Layer by layer they penetrate into the core of all sounds – silence.

On Sunday, 6 February at 4 pm Gabriele Hasler will begin the series with G.sang I – a solo performance for voice, eucalyptus branches and loops.

“Haslers Vokalisen – at times unpretentiously virtuoso forays through the vocal techniques of the planet – dance questioningly and extremely gracefully along the edges of the comprehensible, where Gabriele Hasler has always moved inimitably. – Hans Jürgen Linke, Frankfurter Rundschau

Hasler’s G.sänge are presented in the context of Frei.Zeit. In this new series of events on every 1st weekend after the end of the exhibition, the GAK makes its rooms available for public performances of various kinds.

As part of the series Frei.Zeit.