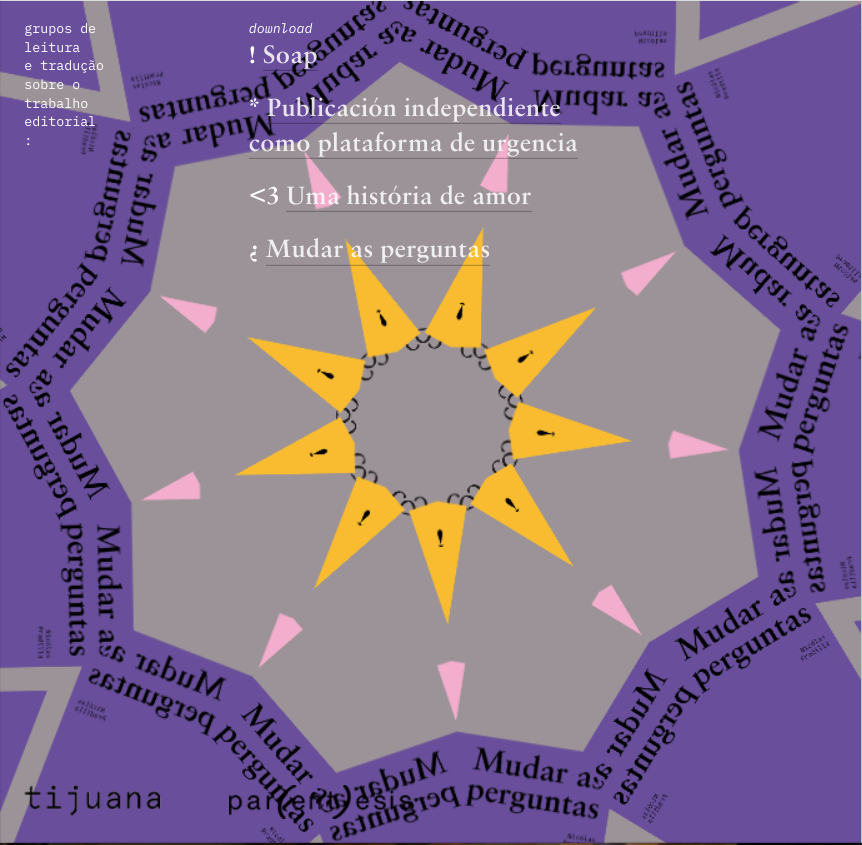 In 2020-2021 the Brazilian editorial initiative tijuana, in partnership with the platform par(ent)esis developed the project Reading and translation groups on independent editorial work. Facing a situation in which the possibility for face-to-face exchanges was far off, tijuana proposed virtual meetings to deepen independent editorial work, in which texts in Portuguese, English and Spanish formed the basis for debates on what, how and why to publish. The exercise of reading extended to a collaborative translation of writings that put forward the essence of the act of publishing independently.

The talk includes a special focus on one of the collectively translated texts: “Soap”, by Fabio Morais, which will also be distributed to the visiting public in printed format. “Soap” is a kind of manifesto of independent publishing, written from a historical perspective on editorial practice in Brazil.

Opened in 2007, tijuana started as an initiative of Galeria Vermelho (São Paulo, Brazil) to create an exhibition space to show works, especially artist´s books, that didn’t fit smoothly into traditional exhibition spaces. In 2009, tijuana inaugurated its first Printed Art Fair, uniting publishers from Latin America dedicated to artists’ books and special editions. Since 2010, tijuana has been publishing its own editions through the Edições Tijuana. tijuana is an iniative by Ana Luiza Fonseca.

The Reading and translation groups on independent editorial work were developed together with curator Tanja Baudoin and in partnership with platform par(ent)esis who research, produce and publish artistic and curatorial projects in the format of print publications since 2006.

Lecture and Talk
in English and as hybrid event

This programme is part of publics&publishings, a collaborative project between GAK, Künstlerhaus Bremen as well as Kunsthalle and Kunstmuseum Bremerhaven, which is being developed as part of “dive in. Programme for Digital Interactions” of the Kulturstiftung des Bundes (German Federal Cultural Foundation) with funding by the Federal Government Commissioner for Culture and the Media (BKM) through the NEUSTART KULTUR programme.