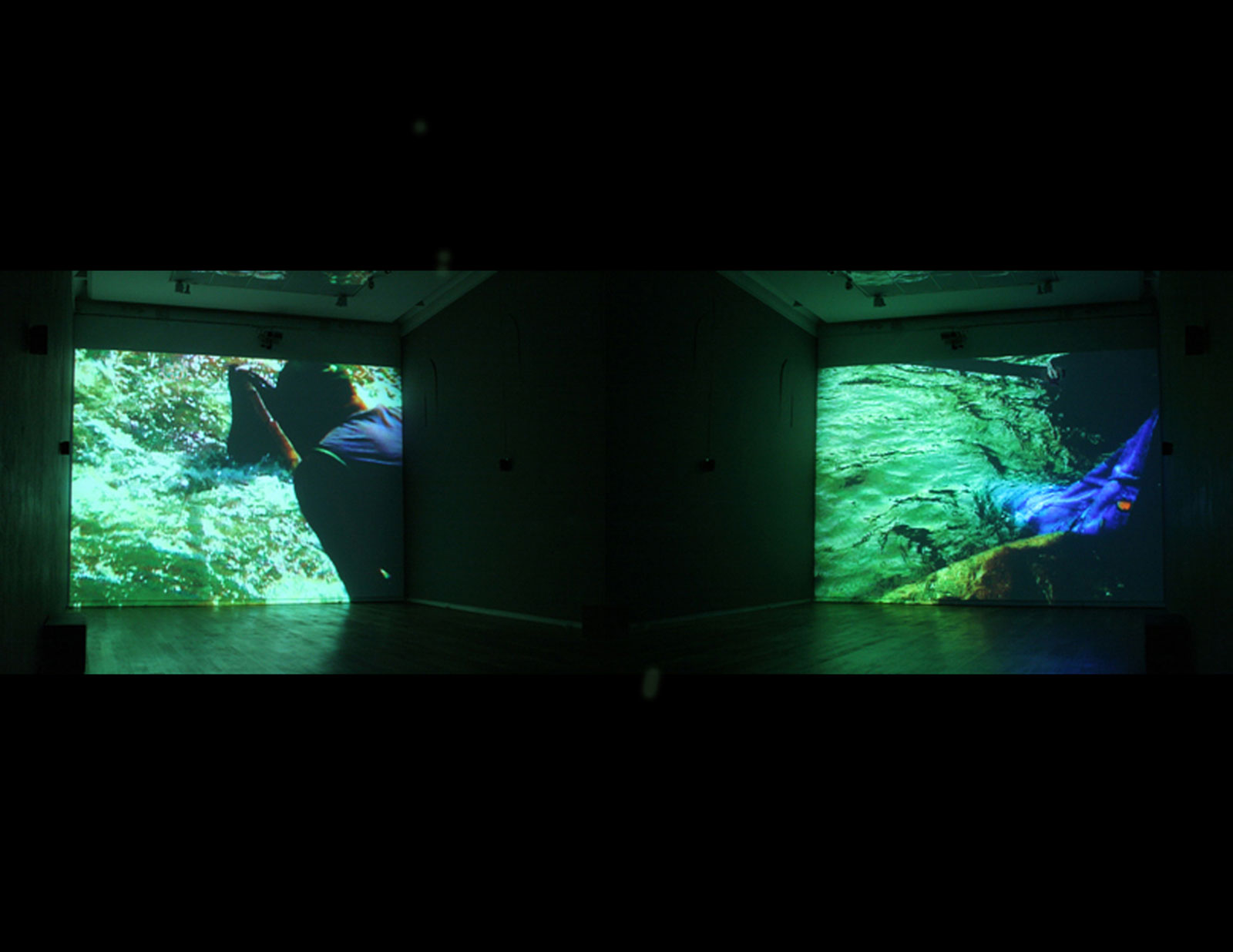 As an alternative to the nationalistic and male-dominated celebration of Latin America’s 200 years of independence in the Bicentenario Year 2010, selected Latin American women artists will enter into a critical dialogue on alternatives to the conventional politics of memory in Bremen in October 2011. The project initiated by Cordelia Dvorák and Hedda Kage Visiones desde la Memoria. The Female View from Latin America presents artists from Mexico, Chile and Colombia whose works set themselves apart from the current historical images and discourses of their countries and question and reassess national and gender-specific definitions of independence and memory.

It is in this context that the Colombian artist Clemencia Echeverri (*1950 in Salamina, Caldas, lives in Bogotá) is showing her media installations Treno (2007) and Acidia (2005) at the GAK Gesellschaft für Aktuelle Kunst, which investigate the interplay of memory and violence in Colombia. The two works by the internationally renowned artist, whose work is also represented in Great Britain, Switzerland and Poland, will be shown for the first time in Germany.

Treno, a kind of audiovisual funeral song, refers to one of Colombia’s omnipresent phenomena: the violent disappearance of people. In the case of Treno, one of the most vital lifelines of Colombia, the river Cauca. The artist places the viewers between two oversized large-scale projections of the floods of the Cauca River and conveys the murderous scenes of arbitrary inundating and drowning, consciously refraining from explicit horror images, using only anonymously drifting pieces of clothing in the rising current. They are accompanied by the lamentation of the survivors on both sides of the river, which remains without an answer and finally falls silent in the sound of the water. Echeverri on the genesis of Treno: “One day I received a call in Bogotá: ‘I don’t know what to do, Señora. They took my son away. They came at midnight and dragged him away. The call came from a remote footpath in the middle of the Calda area, very close to the Cauca. A story like so many in Colombia for years. The distance to the scene is oppressive, but the more familiar the story from the daily news. The war again very close, and part of me. And myself: silent, stirred by silence and disarmed.” The artist further describes Treno as an “audiovisual installation between two shores. Image and sound in dialogue, in search of an echo. Silence carried away by the waters of the Cauca. The cry of despair so familiar in Colombia, which remains without response.”

More intimate and almost minimalistic is Echeverri’s caligraphic work Acidia. It shows the legacy of a 17th century Colombian nun applied to the wall by the artist, which appears and disappears in secret writing. It is one of the earliest and most important testimonies of female mysticism in Latin America: an expression of a woman’s loneliness in the struggle with her own demons, a visual metaphor of the fragile fleetingness and simultaneous indelibility of female memory.

The presentation of Echeverri’s works will be complemented by a virtual discussion group of 25 women from the Latin American political and cultural scene, each of whom in her own way has continued to write the history of her country and is today involved in shaping it in practice. In a special exhibition dedicated to Visiones desde la Memoria. The Female View from Latin America, Cordelia Dvorák, a theater and film director living in Mexico City, asked them on the occasion of the Bicentenario about their personal reading of visions of freedom and memory in the context of their works. Among others, she will speak about politically active writers such as Laura Restrepo (Colombia) and Elena Poniatovska (Mexico), journalists such as Carmen Aristegui and Lidia Cacho (Mexico), visual artists such as Lotty Rosenfeldt (Chile), Beatriz González (Colombia) and Teresa Margolles (Mexico), theatre women like Heidi Abderhalden/Mapa Teatro and Patricia Ariza/La Candelaria (both Colombia), Marcia Scantlebury, Curator of the recently inaugurated Museo de la Memoria (Santiago de Chile) and finally Michelle Bachelet, the first female president of Latin America, daughter of an Allende General, pediatrician, single mother and since the end of 2010 first chairperson of the newly founded Department for Female Equality of the United Nations in New York, lives an image of women that is still atypical for South American society today.

Parallel to the exhibition in the GAK, in frameworking of Visiones desde la Memoria. The female gaze from Latin America the Chilean director Manuela Infante is invited to Germany for the first time (premiere in the Schwankhalle on 19.10.10, further performances there on 21 and 22.10, each at 20.30 hrs) with her piece Menschenfüttern verboten! – Human Zoos. Using scenic means Infante approaches the historical connection between museum and theatre and investigates the role these two explicitly European cultural techniques have played in the long history of the (post-)colonisation of America. She constructs her play around a (historical) case of several Mapuches (an indigenous tribe of South America) being abducted to Europe, their obscene display in the zoological gardens of Europe and their forced adaptation to European customs.

With its three interdisciplinary parts (the works of Clemencia Echeverri and the video gallery in the GAK, the play by Manuela Infante in the Schwankhalle and the Latin American documentary films) Visiones desde la Memoria. The female view from Latin America invites to vital, contemporary mnemonics. Against cloaking pathos and relieving escape routes into abstraction, own and foreign history enters into a lively dialogue and calls for sensual participation.

Within in the framework of Visiones desde la Memoria. The female gaze from Latin America. An interdisciplinary encounter of women artists from Chile, Colombia and Mexico