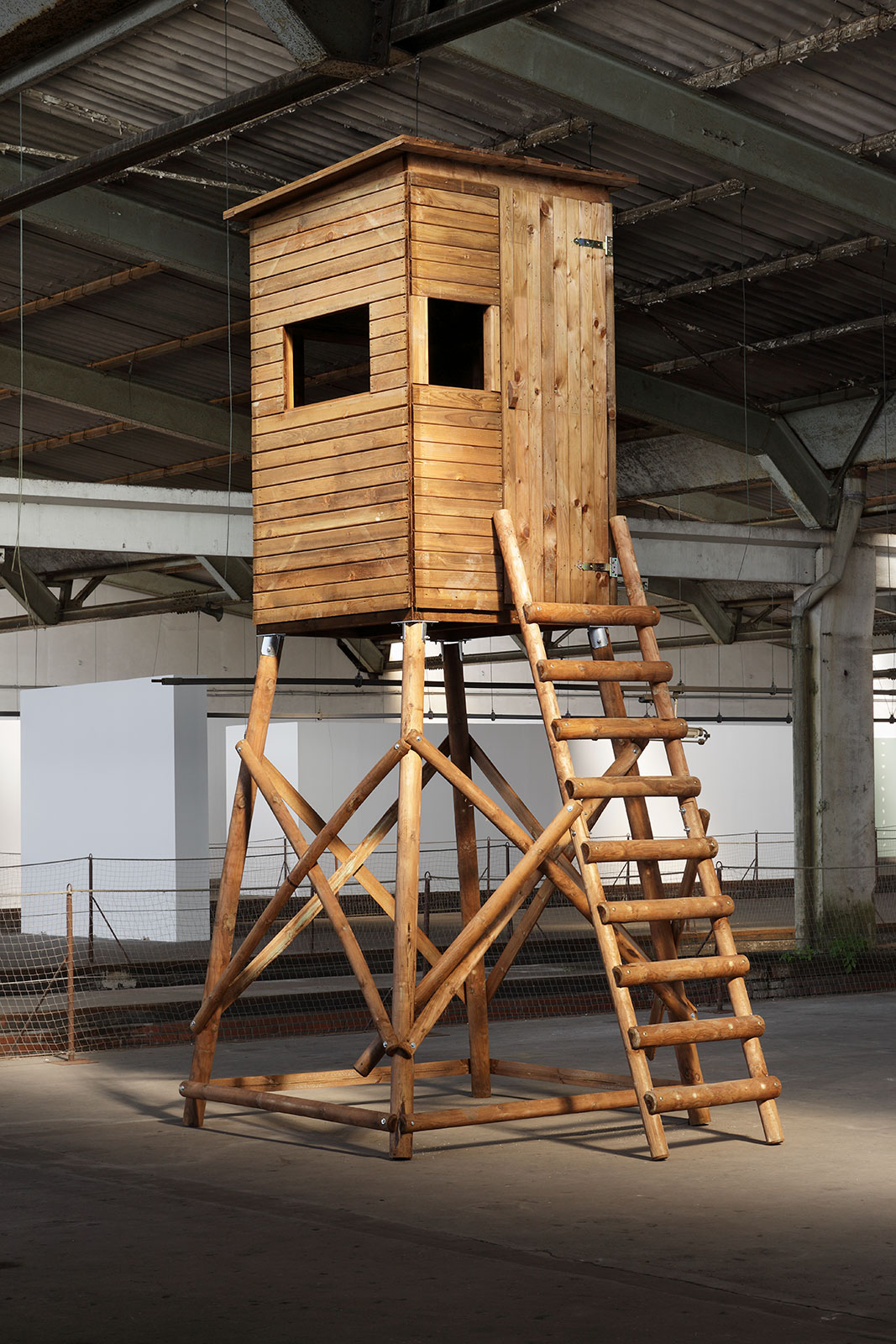 In the context of the 8th Bremen Spring of Art, Kornelia Hoffmann realizes the site-specific work for the booth of the GAK Gesellschaft für Aktuelle Kunst.

To this end, the artist has installed a standard raised hide in the Gleishalle, as it is well known from woods and fields. Used as a hunter’s guard and shooting range in the hunting ground, it is however removed from its conventional function in the exhibition space. On the one hand, it can now be seen as an autonomous object, which is characterized by specific formal-sculptural qualities. On the other hand, the raised hide can also be used in a way that is quite similar to its original function: visitors to the Kunstfrühling can climb up, take a seat and view the events from an elevated position.

Through the minimal gesture of shifting places, the structures and patterns of behaviour of the art world are questioned on a large scale – a terrain in which people are targeted, assessed and taced. Who is observing, who is being observed? Or: who is part of the whole, who is an outsider?

The broadly defined approach of Kornelia Hoffmann’s work is linked to her artistic strategy of revealing the ordering systems of spatial and communicative structures. To this end, she transfers situations and materials into new compositions and contexts by means of montage techniques – for example, by combining architectural and linguistic elements in her collages or by shifting contexts as if they had been defined in broad terms.

Kornelia Hoffmann (*1964 in Remscheid, lives in Bremen) studied photography and media at the FH Bielefeld (M.A. 2010). In addition to solo presentations (e.g. at the Galerie für Gegenwartskunst, Bremen, 2013, or basis e.V., Frankfurt, 2011) and projects in public space, Kornelia Hoffmann has participated in numerous group exhibitions (including Beit-HaGefen Art Gallery, Haifa/Israel, 2013; Städtische Galerie Bremen, 2012, and Projekt Raumkante, Bremen, 2010). Together with Eugenia Gortchakova, she is the winner of the 20th Video Art Promotion Prize Bremen, 2011, and received the Berlin Residency Scholarship of the Senator for Culture Bremen in 2014.