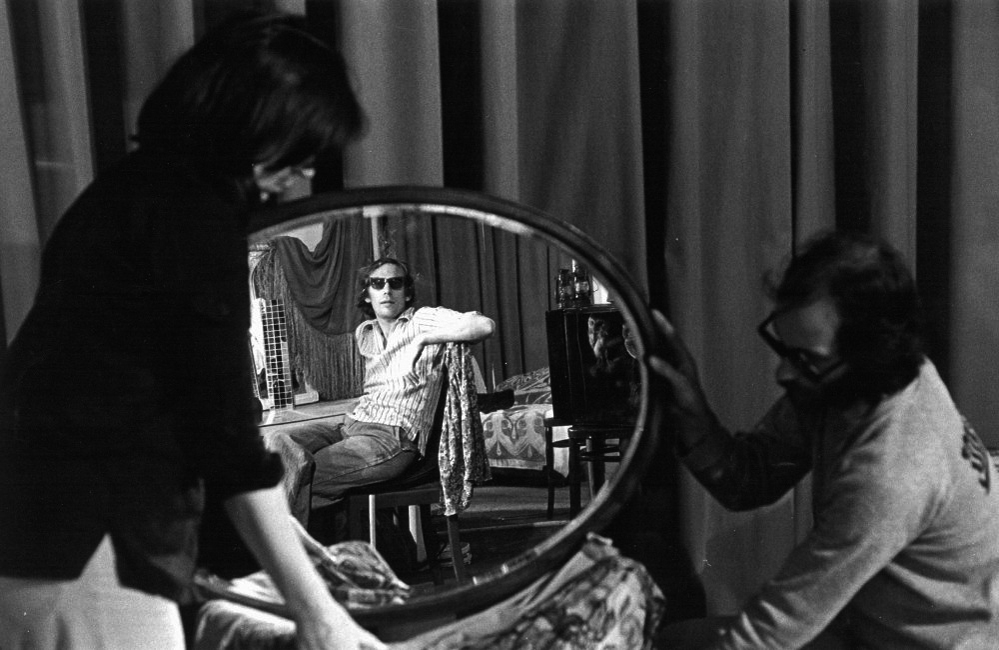 Laura Mulvey and Peter Wollen are best known as film theorists and filmmakers. As writers, they made highly influential interventions in film theory such as Mulvey’s “Visual Pleasure and Narrative Cinema” and Wollen’s “The Two Avant-Gardes” (both 1975). Between 1974 and 1983 the pair made six films together, seeking cinematic forms that investigated and countered dominant languages of looking, signification and narration, and that could engage the viewer in conceptual debate. Across writing and filmmaking their works bring into contact semiotics, feminism, psychoanalysis, and histories and theories of the avant-garde. These concerns, although modulated and reworked in different ways, continue in the projects they undertook separately from the mid-1980s onwards.

This exhibition opens up new ways of understanding this body of work by refracting Mulvey and Wollen’s output through the prism of art. Mulvey and Wollen’s engagement with art and artists has always been a central dimension of their activities, as evidenced by their documentaries and “theory films” about or featuring artists, critical writings, teaching, curating, their production of artworks, and their role as important interlocutors for artists.

“Intersections in Theory, Film and Art. Laura Mulvey and Peter Wollen” presents moving image works, audio recordings, drawings, diagrams, photographs and archival materials in order to map the co-ordinates of two transdisciplinary, overlapping practices. It includes collaborations, conversations and interactions with artists from the 1970s to the present, and works by other artists in explicit or implicit dialogue with Mulvey and Wollen’s body of work.

Peter Wollen (born 1938 in London, died 2019) was a radical filmmaker, film theorist, and screenwriter, whose crucial book, “Signs and Meaning in the Cinema” (1969), continues to challenge and provoke. His other books include: “Readings and Writings: Semiotic Counter-Strategies” (1982), the alternative history of 20th century art “Raiding the Icebox” (1993), “Paris/Hollywood: Writings on Film” (2002), and “Paris/Manhattan: Writings on Art” (2004), all published by Verso, as well as a BFI Classic on “Singin’ in the Rain” (1992). He taught film at a number of universities and was Professor Emeritus at the University of California, Los Angeles. Wollen co-wrote the screenplay for Michelangelo Antonioni’s “The Passenger” (1975) and subsequently worked outside mainstream cinema, collaborating on six films with Laura Mulvey. His final feature film was a solo project, “Friendship’s Death” (1987), starring Tilda Swinton as an alien who lands in Amman, Jordan, during Black September, 1970. His expansive interests included organizing paradigm-shifting art exhibitions, such as “Frida Kahlo and Tina Modotti” (with Laura Mulvey, 1982) and “On the Passage of a Few People Through a Rather Brief Moment in Time: The Situationist International” (with Mark Francis, 1989).

Oliver Fuke (born 1987 in London) is an independent researcher. His projects include: “Laura Mulvey and Peter Wollen: Beyond the Scorched Earth of Counter-Cinema” (Whitechapel Gallery, London; HOME, Manchester and NYU, New York, 2016) and “Yvonne Rainer: The Choreography of Film” (Siobhan Davies Dance, London, 2018). Fuke is currently editing a book, “The Films of Laura Mulvey and Peter Wollen: Scripts, Working Documents, Interpretation”, and working on a retrospective of Hollis Frampton’s photographic and xerographic works, which will be presented at Goldsmiths CCA. He has also developed many exhibitions and projects with artists.

Nicolas Helm-Grovas (born 1988 in Vigo) is Lecturer in Film Studies Education at King’s College London. He completed his PhD on the films and writings of Laura Mulvey and Peter Wollen at Royal Holloway, University of London in 2018. Previously he taught in the Media Arts department at Royal Holloway, in the Film Production department at Arts University Bournemouth, and in the Fine Art department at Oxford Brookes University. He has published on topics such as semiotics and the history of the British journal Afterimage, as well as writing texts with or about artists such as Rachel Adams, Maeve Brennan and Imran Perretta (as Jerwood Arts Writer in Residence, 2018). Recent writing includes a text for Cypher Billboard.

Senator of Culture of the Free Hanseatic City of Bremen, Karin and Uwe Hollweg Foundation