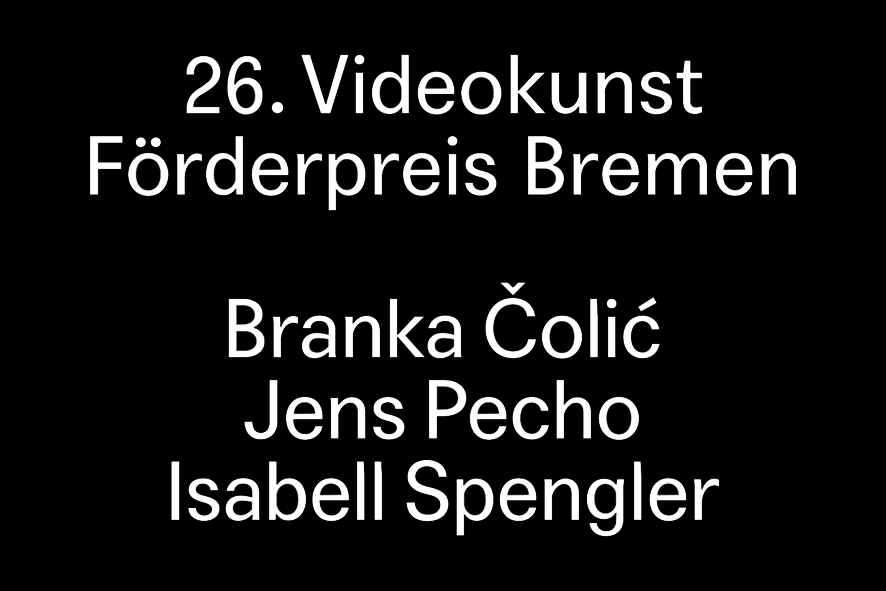 The Bremen Award for Video Art by Filmbüro Bremen enables the realisation of new video art projects every two years. In 2019/2020, the prize was awarded to Branka Čolić, Jens Pecho and Isabell Spengler. The projects were selected by a jury consisting of Katrin Mundt (festival curator, EMAF, Osnabrück), Nadja Quante (curator, Künstlerhaus Bremen) and Paul Wiersbinski (artist). This year’s presentation of the three new productions will take place between 24.04.– 27.06.2021 at GAK Gesellschaft für Aktuelle Kunst.

From 27th March to 24th April, Branka Čolić posted a daily video on her YouTube channel brankart, in which she asked herself questions about her self-image and self- optimisation as an artist. Since the beginning of the exhibition, new videos will be available on brankart approximately every two weeks. After the exhibition has opened, a new video will be available on brankart approximately every other week. In addition to the video blog, Čolić has realised a work in the interior and exterior space of the GAK (wall display showcases): Based on the “tea bag wisdom”, promoting self-love and mindfulness, as offered by the brand Yogi Tea, Čolić presents aphorisms of a somewhat different nature—exploring the area of tension between the necessity and the commercialisation of self-care and work ethic.

Jens Pecho combines video, sound, and sculptural elements in his multi- part work to create a complex spatial experience somewhere between a sacred space and a shopping mall. The inherent promises of these places—redemption and consumption—are evoked and simultaneously disappointed. In the video essay Aah, Awe and Ugh (2021), Pecho negotiates the historical shifts in meaning of the terms “awful” and “awesome,” thus putting “awe,” the reverence for the sublime, up for disposition. Scattered throughout the exhibition space are objects from the series Do Not Eat, Throw Away (2021): seat cushions modeled after larger-than-life silica desiccant sachets. They lend the exhibition space the feel of a showcase of goods in which art becomes a product.

The video installation Voice Elevator by Isabell Spengler was created in collaboration with the composer and performer Neo Hülcker. Using means of Structural Film and methods of queer abstraction, conventions of narrative cinema as well as psychological acting are examined and questioned. The portrait-format projection shows scenes of elevator rides: a musical composition and a dialogue for a voice that cracks explore moments of a gender transition. Playing with the concepts of the “status seesaw” and the “elevator pitch,” the gender-political connotation of the vocal pitch is addressed, and its general effect in regards to authority and status is performatively explored. The boundaries between acting and everyday life, between intimacy and social analysis become blurred.

Branka Čolić
German Croatian or daughter of Yugoslav immigrants born here in Germany, knows the open yet secret spaces of performance art as well as those of pop culture—from the inside. Language is her preferred artistic material. Branka writes, sings, performs, makes films and has a YouTube channel.

In cooperation with Filmbüro Bremen

Please note: Due to the current situation, more detailed event information will be announced at short notice via the digital channels.

Jens Pecho received the NEUSTART KULTUR artist grant from the Stiftung Kunstfonds.
Isabell Spengler was supported by the Senate Department for Culture and Europe, Berlin.