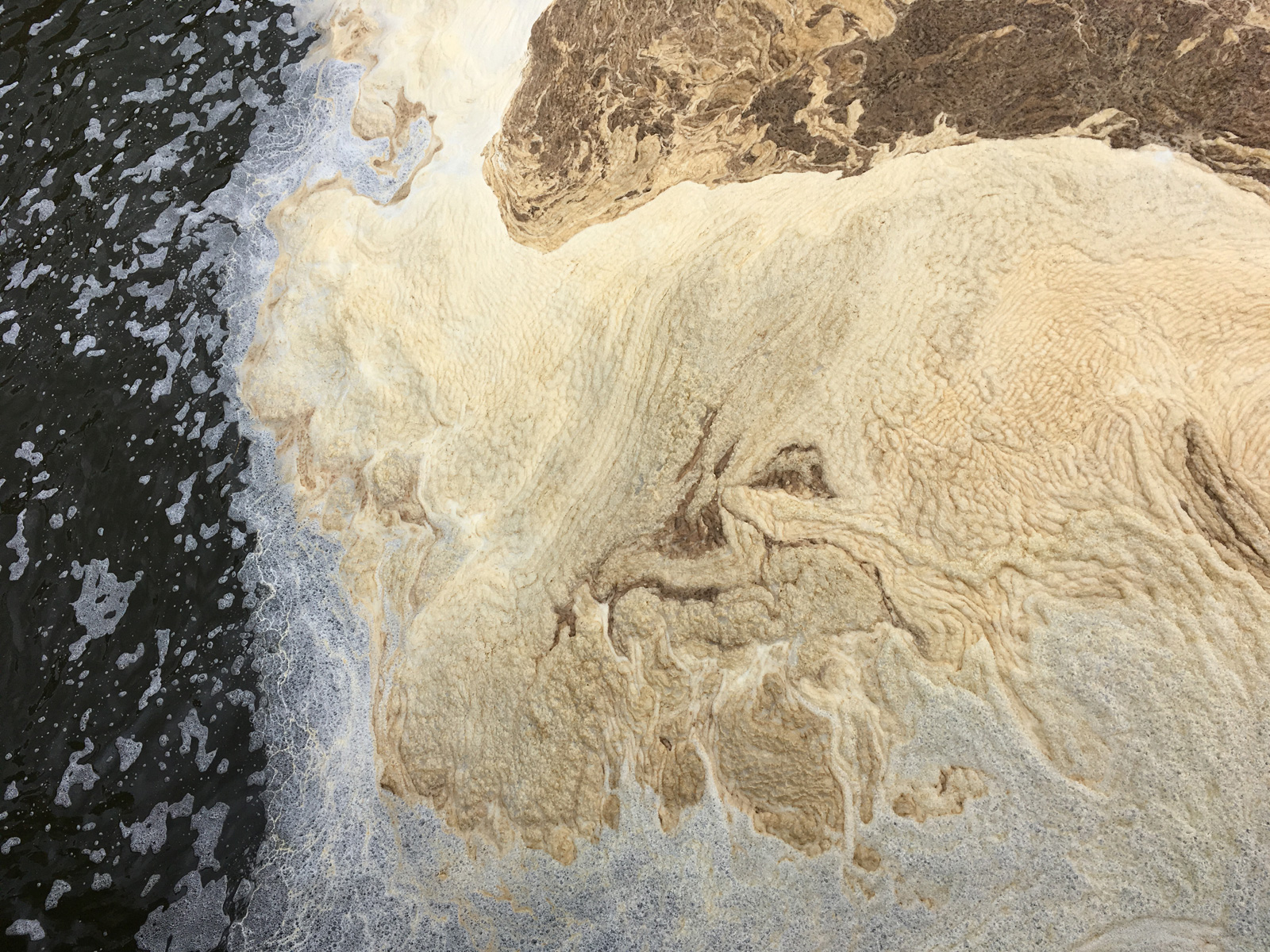 A wet cellar. Its walls are covered with proliferating stains and discoloration. They move up from the floor and condense into dark and unsightly accumulations in the corners of the room. The single small window directs the view to the Weser, which flows directly past the walls and rises and falls with the tides. The assumption is obvious that water percolated into the room due to a longer period of moisture penetration of the masonry and that this is also the reason for the water damage. Only a few things are irritating: The traces of moisture are clearly visible on the walls, but the smell and the clammy feeling of wetness are missing. And despite the closed window, a sound of water can be heard.

In his work “tidal”, Bradley Davies deals with the basement of GAK and its proximity to water as well as with the element of water itself. At the same time, he involves the viewer in a kind of deception of eye and ear. For neither is the cellar damp, nor is there an immediate danger of water penetrating and flooding the room. Instead, Davies covers the walls with fine chalk and charcoal drawings in trompe-l’œil technique and faithfully reproduces the typical manifestations of water damage. The fact that he uses chalk and charcoal for his wall paintings is also due to the fact that both materials absorb moisture: Charcoal is ideal for keeping damp rooms dry, chalk binds sweat. In this way, only his fine wall covering of chalk and charcoal keeps the pores of the room closed.

Amidst the wall paintings, sounds of water can be heard, and the complexity and strangeness of a visible and invisible world is revealed. They show that water is by nature multifaceted and predisposed to material change. This tendency to shift forms may not only worry the viewer but also some of the protocols used for the scientific research and geopolitical organization of water. Using contact microphones and highly sensitive underwater microphones (hydrophones), Davies records singular sounds in the tradition of field recording, and reassembles them as a sound collage. The recordings were made in and around Bremen, as well as in Cologne and Tangier. “Doing the sound recordings is a way for me to do similar to what the stain, damp or mould would do, to bring the outside inside Also, I have been mostly recording places I and others maybe wouldn’t normally get to see, or even using hydrophones and contact microphones to tap into worlds that are partially invisible to us”, the artist says. With the knowledge of those places that Davies reveals in the exhibition and in the online archive of radio aporee, listening to the water creates new, inner images that connect with the visible traces on the walls and tell past and future stories.

Bradley Davies (born 1990 in London) studied at the Glasgow School of Art BA (Hons) in 2012, and was Meisterschüler at the HfbK Städelschule in Frankfurt am Main in 2017. Exhibitions include Neue Alte Brücke, Frankfurt, Temporary Gallery, Cologne, Neuer Essener Kunstverein, Kunstbau im Lenbachhaus, Munich. He lives and works in Cologne.