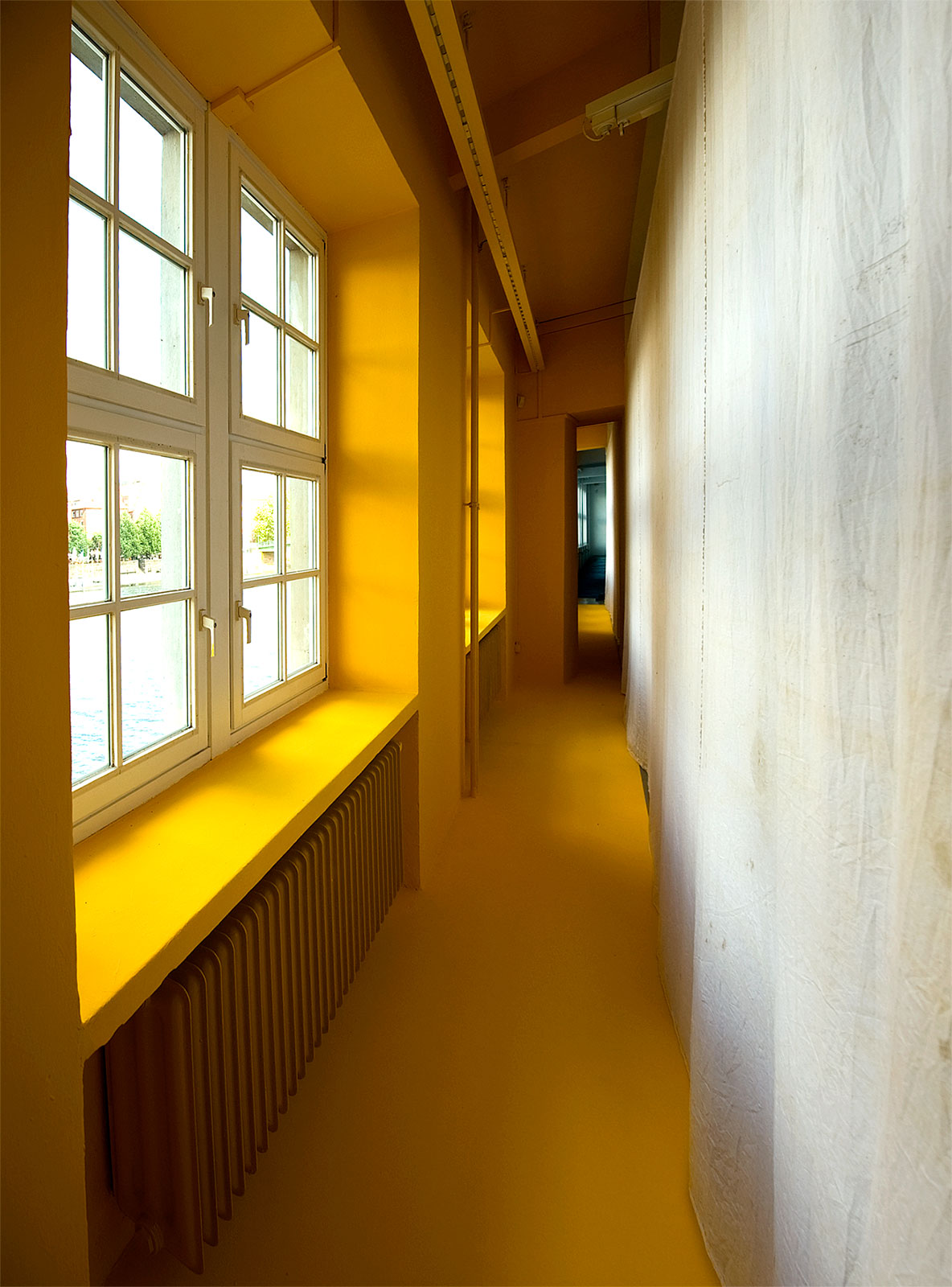 In her work, New Zealand artist Kate Newby (born 1979, currently living in Auckland) engages with the exhibition space and its surroundings. Newby herself has stated that she is interested in creating “a relationship to the place through action”. In other words, it is the architectural context of the exhibition space (such as structural details or the interior and exterior colours of the building, as well as the location and its integration within the wider environment) which informs her thinking and influences her specific approach. In most cases, her works entail inconspicuous interventions that either extend or contradict the characteristics of the space: fabric panels, brick ledges, tilted floor levels, hand-written murals, and sculptures fashioned from materials found on site.

The title of her exhibition at Bremen’s GAK Gesellschaft für Aktuelle Kunst, “Crawl out your window, references several key elements of Newby’s artistic practice: physical action, architecture, and such themes as resistance, escape routes, and opposition. These elements have a very material presence in the simple yet enigmatic works Newby has created for this exhibition. The addition of a concrete ramp in the main hall of the GAK has significantly altered this space, while an ensemble of translucent drapes enshrouds the room’s otherwise dominant window front, initiating a dialogue between light and material, and forming an ephemeral hideout.  By positioning works from “Crawl out your window” in the GAK’s interior and exterior exhibition spaces, Newby also forges a link between institutional and public space. This approach invites viewers to explore the works in a considered manner, rather than merely casting a fleeting glance at the exhibition as a whole. In creating works that can be viewed from disparate sites and that refer to their respective spatial other – a slogan on the embankment wall opposite the GAK echoes Lawrence Weiner’s eye-catching inscription on the building’s facade, for instance – Newby initiates a conversation between these exterior and interior spaces. Her interventions take on the language of their surroundings so sensitively and precisely that rather than push into the foreground, they shift attention to the environment – making everyday space, lived space, the main protagonist of Newby’s work.

The materiality of Newby’s works shows a certain affinity to the ideas of the Arte Povera movement, which sought to communicate conceptual ideas while engaging with the materials and applying them economically. Accordingly, her works often consist of simple or found materials such as wood, stones, concrete, cotton fabrics, ropes, fragments of sentences, and photographs. These elements are brought together in a simple, often seemingly provisional manner that, on the one hand, reflects their previous functions and the everyday, while at the same time adding poetic charge. Newby’s interventions work with and against the space they inhabit – they seem both ill-matched and well-suited to their environments. Newby creates a relationship between the materials used and the existing spaces, thus revealing the hidden or latent potential of both.

This exhibition at the GAK Gesellschaft für Aktuelle Kunst will be Kate Newby’s first institutional solo exhibition in Europe.