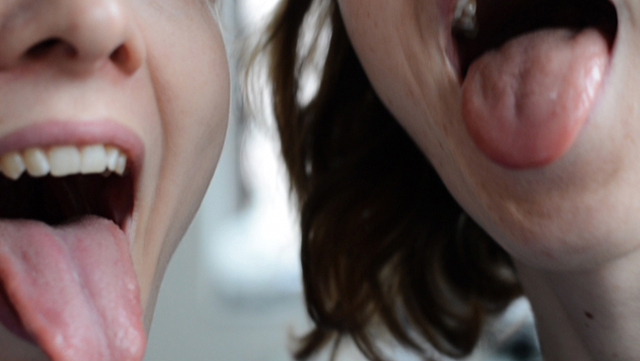 The practice of glossolalia, speaking in tongues, is tied to the common understanding of religion, yet it reflects the very inverse of religious practice. Where religion is realized through fixed rituals and overseen by an institutional fear of loss of control, glossolalia breaks through this seemingly safe choreography, galloping unharnessed and free. The tongue begins to speak independently of its owner, uttering the language of undiluted spirit.

Who are we, independent of the language we use to communicate with each other? If written text and spoken word are the constructs that assemble our reality, there is an ongoing stirring to reverse-engineer an understanding of the phenomena of Derridian logocentrism. Postmodernism promised to reveal the illusion through deconstruction, yet the castle still stands and the moat grows ever deeper. And so we look for ways around these edifices. By cutting words into pieces and allowing them to grow into new forms, like flatworms ever regenerating, Kristina Buch shapes a nuanced understanding of the syllables that bridge knowing to the known, and the unknown to the yet-to-be-knowable.

You can’t walk unless the word runs. Here, the ear picks up the sound of layered utterances. We are invited into the space beyond the rigid didacticism of both the religious and the postmodern, far past our tongue-tied faith in that which can be constructed and deconstructed. A series of videos, shown on flat screens, share the exhibition’s title. As though the walls have anthropomorphized and grown a garden of human mouths, each screen presents a close-up curtain of lips that open and close, revealing tongues that press delicate and fiery messages against walls of teeth.

An installation of eight jacquard-woven tongue flags hang from the ceiling, lapping away the viewer’s extant associations. The front and back sides of a jacquard weave—a textile technology which figures prominently in the invention of computer code by Ada Lovelace—present a positive and negative image. When rendered into flag-forms, we are invited to consider the ontology of flags in and of themselves, so important to nations, armies, politics and sports. Are they trying to speak, and must they always play two sides against each other? The origin story of the tongue is one of protection. All reptiles, birds, and mammals have tongues, as do most amphibians. These appendages arrived in our mouths not to speak words and phrases, but to taste. Specifically, to identify poison. To discern. That Homo sapiens developed a language facility that relies on the tongue—our danger detector—is an evolutionary adaptation.

William James posited that, “If the grace of God miraculously operates, it probably operates through the subliminal door”. If that door is a language, it is not one that we yet know how to write or speak. Thus, as philosopher Simone Weil stated, “Impossibility is the door of the supernatural. We can but knock on it. It is someone else who opens.” It is answered by the countercultural, eternally untamable. Through image and language, Buch directs her viewers toward this level of intuitive discernment, but not for the facile goal of understanding.

We might ask: what do tongues—reminiscent of the moist and vulnerable corporeal; a guard at the door, securing our opening to the world—do? They move in time with the politics of the moment. Or perhaps they refuse those safe and cozy moves and become missiles, or targets. In this way, they taste history. (Aimee Walleston, 2019)

Kristina Buch: You can’t walk unless the word runs. from GAK Bremen on Vimeo.

Senator of Culture of the Free Hanseatic City of Bremen, Kunststiftung NRW, Kulturwerk Foundation of the VG Bild-Kunst, Christian Strenger, Karin and Uwe Hollweg Foundation, and special thanks to private donors